Have you started to consider the economic impacts of climate change in your long-term business and investment strategies? While in the past enterprises often considered economic issues to be the root cause of risks around the globe, instead, it’s climate change that is gaining prominence. The 15th edition of The Global Risks Report from the World Economic Forum and its findings demonstrate why these issues could prove to have long-term effects on the economy and your business.

On 15 January, the week before the 2020 World Economic Forum kicked off in Davos and as devastating wildfires were burning in Australia, the World Economic Forum published the latest edition of the Global Risks Report. It came out with startling findings concerning climate change. Part of the research asked survey respondents to determine how likely a global risk could happen in the next ten years and the severity of the impact. What were the results? 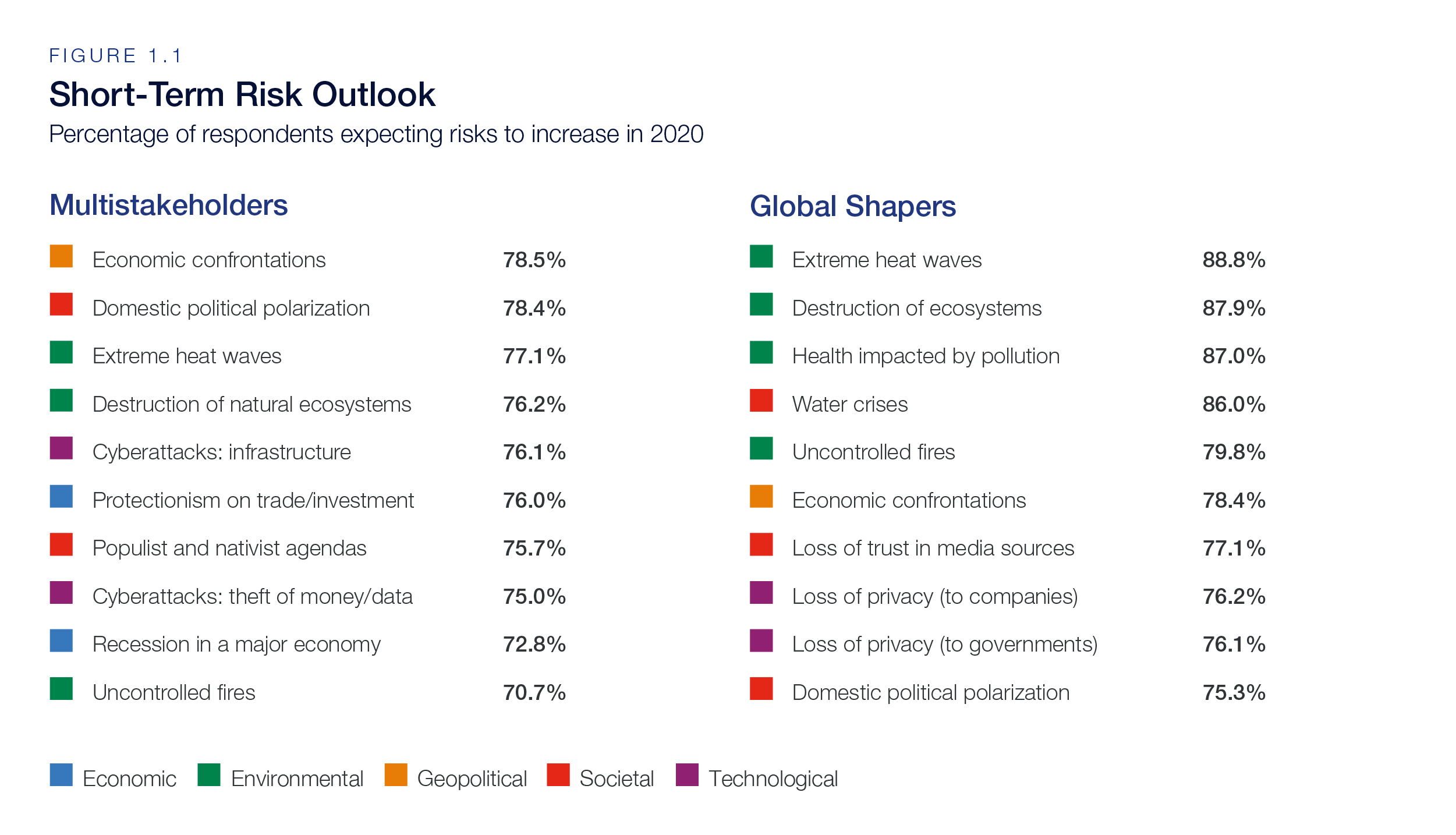 As we can see in the above chart from the study, for both total respondents (the Multi stakeholders) and the Global Shapers, which is the World Economic Forum’s group of young people, the top five issues in the likelihood column are all related to issues stemming from climate change. This was particularly remarkable because this was the first time environmental issues occupied the top five positions for long-term risks for all survey participants in its history. For young people, environmental concerns are at the top of their list of risks for both the short-term and long-term.

Of these risks, the top risk by impact and number two by likelihood was the failure to mitigate and adapt to climate change. So, how exactly does this translate into economic loss due to climate change? In 2018 alone, the global economic impact of climate change due to natural disasters totalled US$ 165 billion, and half of those losses lacked insurance. Plus, a group of 200 of the world’s largest corporations have come out estimating that they would lose a combined $US 1 trillion if there were no action on climate change issues.

How else could we see the impact of the climate change problem in business? The analysis shows that these risks also stretch to capital markets. Of the data about total global losses we mentioned in the previous paragraph, only half of the 2018 losses were insured, and in 2018, the catastrophic protection gap, which the World Economic Forum defines as what should have insurance on it but is uninsured, was estimated to be $US 280 billion. The data from studies like this one prove that the impact from damage to the environment also affects financial markets. What sectors could see an impact? One would be the mortgage market as areas prone to rising sea levels could see en masse defaults on fixed mortgages if banks decide not to insure them due to uncertainties of the land's viability. It may not require a natural disaster such as a hurricane. A buyout measure in the US state of New Jersey bought out people’s properties in flood zones after multiple floods instead of rebuilding on their existing lots.

Another is energy as a transition to low-carbon emissions takes place. The World Economic Forum cited that these actions “...could turn approximately 30% of current oil reserves, 50% of gas reserves and 80% of coal reserves into stranded assets for extractive companies and their investors…” And as industries go through transitions and consolidate, pension funds that invest in these kinds of sections will also see an impact.

While melting ice caps is leading to potential new trade pathways in the Arctic, and those countries with access are looking to capitalise on those possible strategic pathways to supply chain management, we cannot cast aside other consequences. Those economies that depend on agriculture will see an outsize result from extreme weather patterns and an increase in farm disruption. And for human capital, losses coming from heat stress is projected to equal a loss of 80 million full-time positions by 2030.

What are the takeaways from the economic risks of climate change?

As evidenced in the findings from The Global Risks Report, you should consider the long-term impacts that climate change could have on the investments you make in your enterprise and your overall business model. While we wait to see if there are further delays in global stakeholders coming together to take action on moving towards set carbon reduction goals, the implications are that there will inevitably be higher costs if there are delays towards action. We keep hearing there is only one more decade to try to stop the dire results that are estimated. It will require broad efforts across the world in the public and private sectors to minimise global warming's potential effects on productivity this century for the world's economies, both large and small.

If you’re looking for any more reasons to consider these principles, think about the results from the World Economic Forum’s 2019 Regional Risks for Doing Business Report. While The Global Risks Report had climate change issues at the top of the list, this survey of business leaders did not have environmental problems among the top ten globally. Despite that, when breaking the results down by region, business leaders in East Asia and the Pacific, as well as North America, cited climate-related risks including natural catastrophes. And, for the Middle East and Africa, water crises were in the number seven spot among the top ten threats. As such, these points are crucial to consider when operating in these regions.

Should you be looking for a sound investment or business strategy that considers climate change and plans for how it could affect you, our team at Europe Emirates Group will work to help you assess these potential risks. If you would like further information, don’t hesitate to contact us.